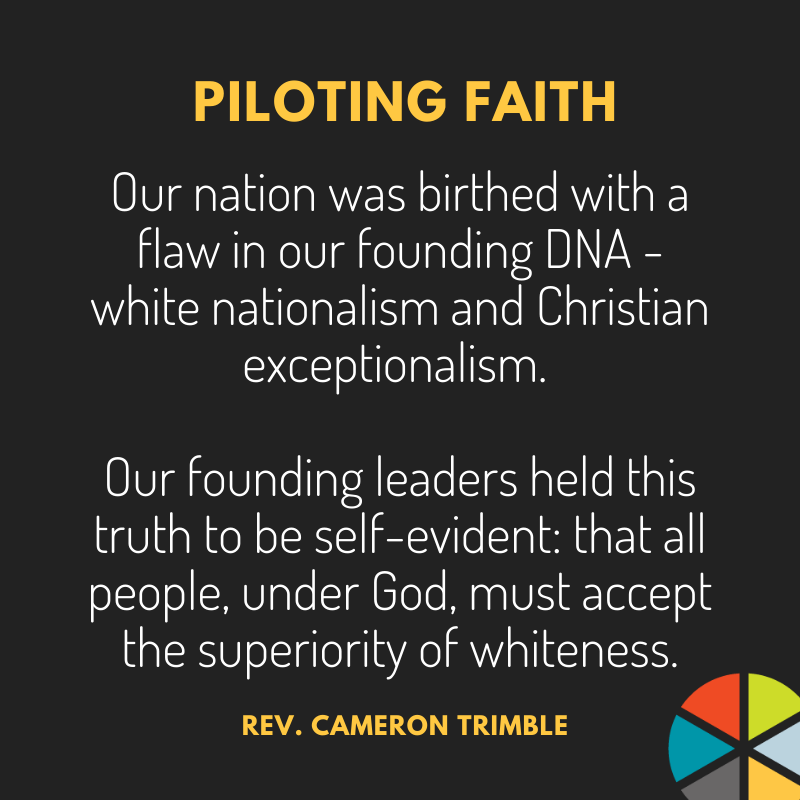 When I was a child going to school in Atlanta, Georgia, my teachers taught me that forming a “more perfect union” of freedom, equality and opportunity was the dream of democracy. “You are a citizen of this country,” they said, “and your responsibility is to hold that dream – even fight for it – not for your individual benefit but for all of us.”

As I grew older, this duty of citizenship became complicated. I realized that my white skin color opened doors of opportunity closed to people with darker skin. My economic class meant that I could go to college and work in an occupation of my choosing. My citizenship allowed me to pass through security lines without question while people from other parts of the world were stuck in systems of surveillance and suspicion.

Without question, I was FREER than many others. I had done nothing to earn or deserve such privilege. I was just lucky enough to be born white. I have benefited profoundly from that luck, and that isn’t right.

Our nation was birthed with a flaw in our founding DNA – we were born in an unholy marriage of white nationalism and Christian exceptionalism. Our founding leaders held this truth to be self-evident: that all people, under God, must accept the superiority of whiteness. We continue that practice to this day.

Robert P. Jones, author of White Too Long: The Legacy of White Supremacy in American Christianity, puts it plainly: “On a broader level, white supremacy involves the way a society organizes itself, and what and whom it chooses to value.… And that’s white supremacy without all the bluster: a set of practices informed by the fundamental belief that white people are valued more than others.”

The evidence is not hard to see. Since the 2020 election, 18 states have passed 30 new laws that make it harder to vote. In my home state of Georgia, legislators have begun transferring control of the elections in Fulton County, one of the most reliably Democratic counties in the nation, from county officials to Republican state officials. This is also happening in Louisiana, with more sure to follow.

We are locked in a battle as old as our nation. But for many of us, we are no longer willing to accept the superiority of whiteness. That has those who have benefited from that privilege acting from fear, expressed as hate. We must make sure that their actions fail.

In the 1950s, Rev. Dr. Martin Luther King Jr. popularized a vision of Beloved community: a community in which everyone is cared for, absent of poverty, hunger, and hate. To achieve it, he said, we have to rebuild our systems currently steeped in racism and division.

The Christian life, he went on to note, is one built on brotherhood and sisterhood of ALL people. No one is better or worse in the eyes of God. No one matters more than another. We cannot be people of faith – any faith – and not live by that fundamental truth.

Civil rights activist Robert Parris Moses warned us that the nation “can lurch backward as quickly as it can lurch forward.” We must choose what kind of nation we will become. The scriptures tell us this: When we decide to live into the dream of freedom, equality and opportunity for ALL of us, then we all thrive. That’s the vision at the heart of the Lord’s Prayer: “Thy kindom come, Thy will be done, on earth as in heaven.” Let’s make it so.