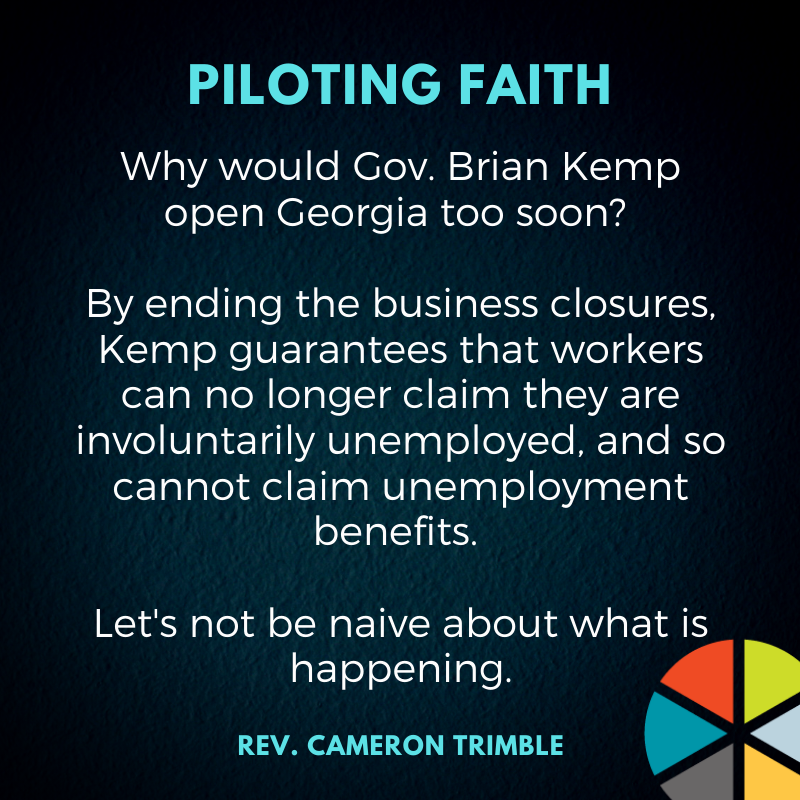 I should write in celebration of Earth Day. I could highlight so many inspiring stories about how the earth is healing and how wonderful it is to see the world coming back to life. The fog is lifting. Hundreds of sea turtles are nesting in Spain. The dolphins are swimming in the canals in Venice. The Himalayas are showing off now that they can be seen. I should focus on that.

But I live in Georgia.

I am embarrassed to say that I live in the state where our governor, Brian Kemp, declared that he is opening the state back up before we have adequate testing or infrastructure to manage an increase in cases. He did so without consulting a single mayor in the state. Republican Senator Lindsey Graham tweeted, “I worry that our friends and neighbors in Georgia are going too fast too soon.” Even Donald Trump said publically that he was concerned that Kemp was moving too fast.

Why would an elected leader make this move?

George Chidi, a Georgia journalist and former staff writer for the Atlanta Journal-Constitution has some insight as summarised by Heather Cox Richardson:

The state’s unemployment fund has about $2.6 billion. The shutdown has made claims skyrocket—Chidi says the fund will empty in about 28 weeks. There is no easy way to replenish the account because Georgia has recently set a limit on income taxes that cannot be overridden without a constitutional amendment. It cannot borrow enough to cover the fund either, because by law Georgia can’t borrow more than 5% of its previous year’s revenue in any year, and any borrowing must be repaid in full before the state can borrow any more.

By ending the business closures, Kemp guarantees that workers can no longer claim they are involuntarily unemployed, and so cannot claim unemployment benefits. Chidi notes that the order did not include banks, software firms, factories, or schools. It covered businesses usually staffed by poorer people that Kemp wants to keep off the unemployment rolls.

I recognize that this sounds cynical to some of you, shocking to others and nothing new to many. I highlight this simply to point out that the people who elected Brian Kemp, white suburban evangelicals, are the same people who go to church on Sunday and call themselves Christians. Somehow they find a way to sit comfortably in their congregations while supporting policies that hurt the very people our Scriptures say we must serve – the most vulnerable among us.

I’m so tired of this. Aren’t you? I’m desperately tired of people pillaging the vulnerable among us and still be rewarded as “good Christian people.” One of the gifts of this pandemic is that it has surfaced the people and places in our society that were already compromised and undervalued. We all have a better sense of what an “essential worker” looks like. What I hope we don’t miss is that this form of mortally corrupt Christianity, the kind that elects “good ol-boy white men and women” under the Christian banner and then rewards them for running roughshod over the values of our faith, cannot be something we carry into the new world that is emerging before us. It is killing us. It is killing our planet.  It’s time to start calling this out. Let’s name it for what it is and what it isn’t. It is NOT consistent with Christian teachings. It is NOT aligned with what Jesus taught us to value. It IS grounded in white nationalism. It IS wrong.

We are walking into a new world together. Let’s do so with greater integrity – a truer alignment with who we say we are, and who we actually are – than we have embodied in the past. All of creation will be better served.

Thank you for reading this rant.

We are all in this together.